We are occasionally featured in the local newspaper. These articles give a flavour of the exciting activities which take place at our School.

Year 2 have been piecing it together 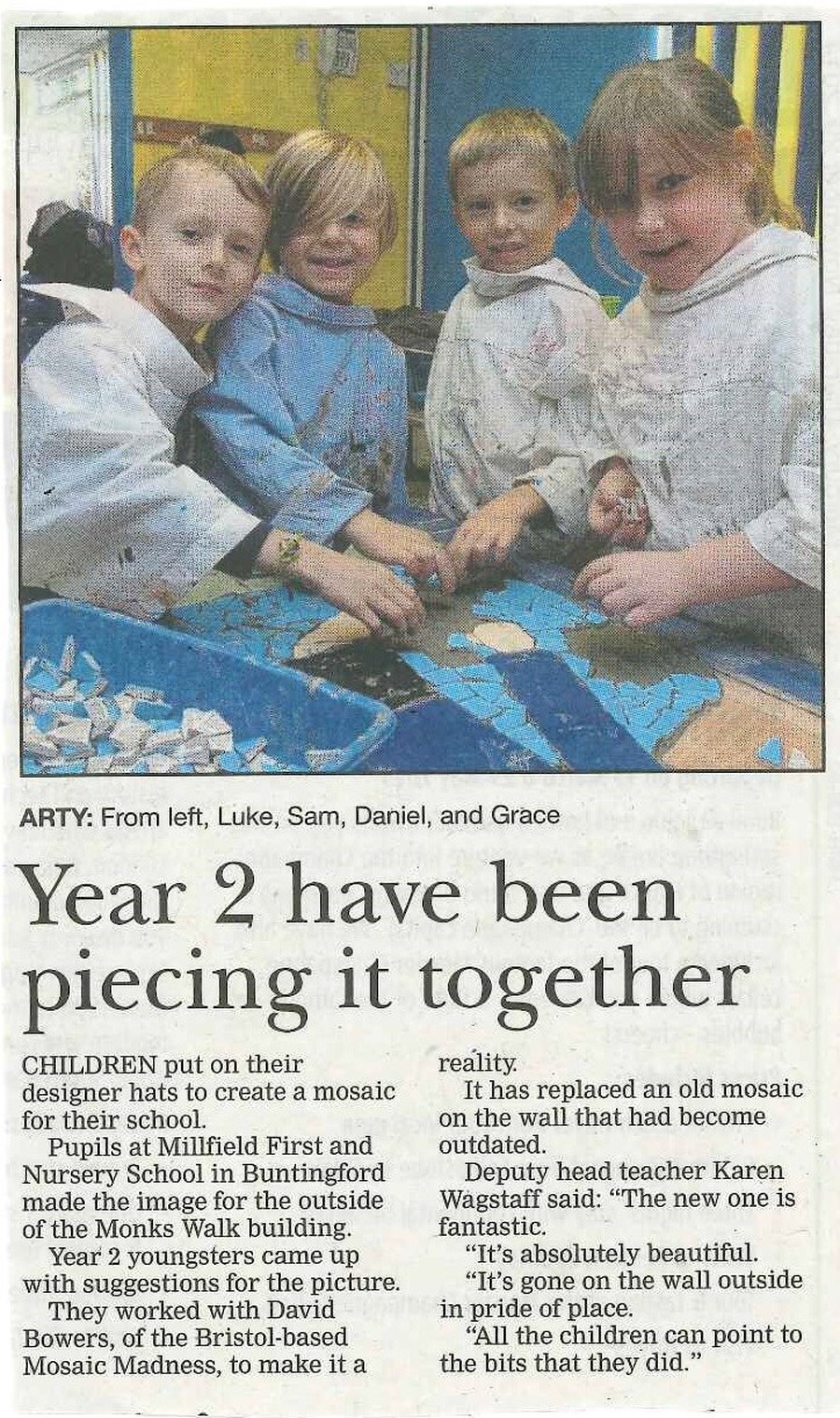 The move into bigger classroom 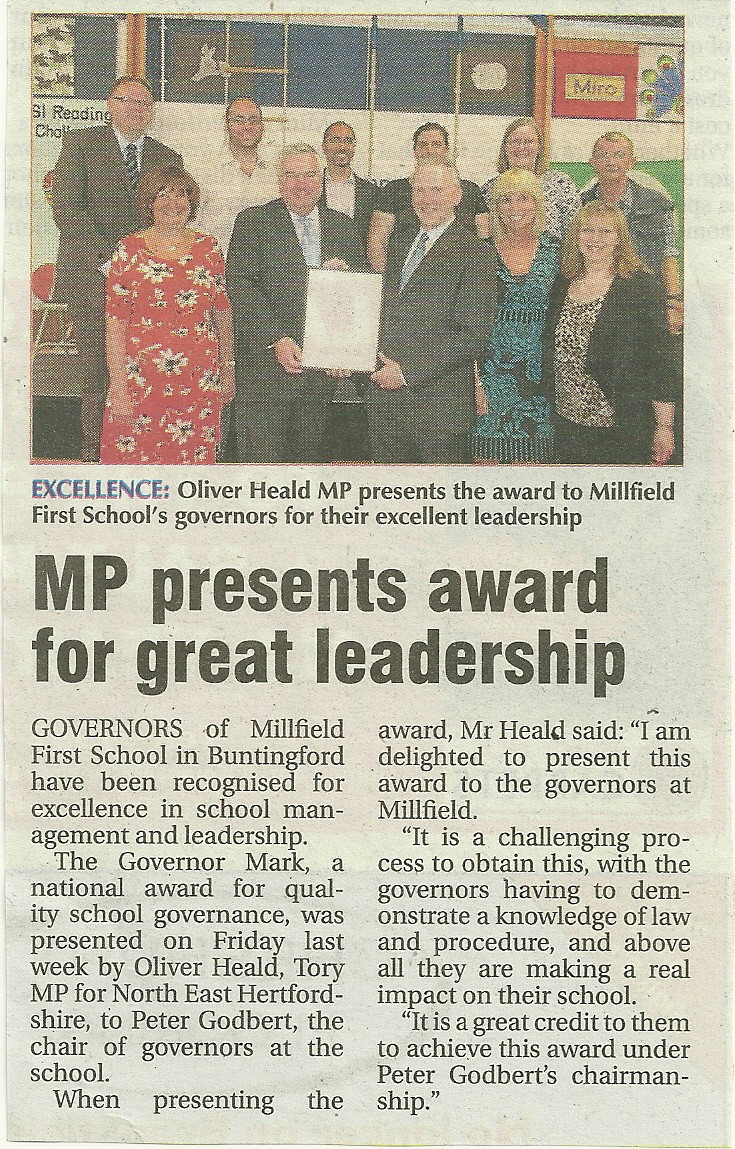 Students from Millfield First School were visited by a team of scientists from GlaxoSmithKline (GSK) during a special science and maths day.

The Key Stage Two pupils from years three and four at the Buntingford school got dressed up in white lab coats and got hands-on experience of science experiments on Wednesday.

Teacher Ms Catherine Young said: "The children had a great time and really enjoyed the hands-on investigations.  Afterwards quite a few even said they wanted to be scientists when they grew up."

Each year group had their own session of doing experiments with GSK team members.  Years three and four then had a joint results session to discuss their findings.  The experiment sessions were about an hour and a half in length and were followed by a half-hour talk on the results.

A GSK spokesperson said: "The children had a great day and I hope that we managed to sow a seed of interest in science that will grow as they continue their education."

Staff at GlaxoSmithKline, with offices in Ware, are permitted to take one day a year off work to give something back to the community.  This day is called an Orange Day.  The object of the Orange Day initiative is to inspire young scientists and potentially persuade them to pursue a career in science.

Headteacher Kathy Willett said: "It was a fantastic day of learning for the children, we are really grateful that the people at GSK took the time to make the day so special for the children."

The school has held special activity days in the past.  This was the first time that specialists had visited the school to give pupils a chance to get some first hand experience of scientific studies.

In addition to Orange Day, GSK runs other programmes for the next generation of scientists such as their Scientists in Sport programme.  The programme uses sport to inspire 11-14 year olds to think differently about science.  It also provides teachers with free resources to help bring science to life in the classroom, covering performance analysis, technology, anatomy, psychology and nutrition.

CHILDREN at a Buntingford school went home with a whole new library after taking part in a book swap day.

Pupils at Millfield First and Nursery School in Monks Walk each brought up to three books to the site on Friday June 7.

They exchanged them for vouchers, which in turn were offered up to buy books that were new to them that had been brought in by the other children.

Headteacher Kathy Willett said: “It went really well".  “Nearly everybody brought a book in and they all went home with new books.”

The idea was the brainwave of the Reading Rockets – a group of eight pupils from Years 2 to 4, whose job is to come up with literary activities for their peers.

The book swap was for all the year groups, including Reception and Year 1.

Mrs Willett said: “The Reading Rockets designed the posters, advertised the event, helped set it up and put the books out.  We will definitely do it again.  It was very popular.”

Other ideas that the Reading Rockets have thought of include story-telling, whereby the older children tell stories to the younger ones, and asking all the pupils to collect jokes to put in a school joke book.

Mrs Willett said: “They’ve had a lot of ideas over time.”

The group meets with her regularly to discuss future literary initiatives at the school.

From the page to the classroom

Youngsters at Buntingford’s Millfield First School have been celebrating scooping an award for its international connections.

The British Council International School Award recognises schools who have worked hard to instil a global outlook in its pupils.

Headteacher Kathy Willett said: “We have established links with schools in other countries and are paired with Yayasan Widya Guna, an orphanage in Indonesia and a Welsh speaking school, Ysgol Gynradd Gymraeg, in Caerphilly, Wales.

“Living in Buntingford the children get limited options to meet children from other cultures and walks of life, so we want to make the children as world-wise as possible.”

An inflatable ‘dinosaur dome’ was put up in the school hall and the students, dressed as palaeontologists, were treated inside to a 3D dinosaur film.

The students had a chance as well to dig in sand trays and recover fossils borrowed from a museum.

Ms Willett said: “Key stage one classes really enjoyed the topic on dinosaurs, it’s very accessible for children of that age. Coming into school dressed up and going into the dome made the topic come alive for them.

“Obviously they learned a lot more about actual dinosaurs and more about how palaeontologists go about their work.”

Characters leap off the page for World Book Day

Pupils are evacuated to war-torn Britain

Pupils travel world in a week

Youngsters reopen the case of the lost dinosaurs